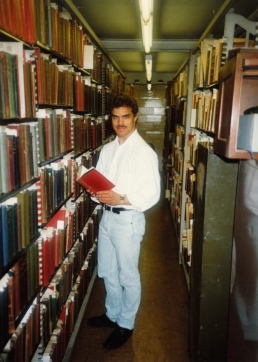 In the Houdini “stacks” at the Library of Congress, 1990

About six months after Harry Houdini died, more than 5,000 of his books, personal scrapbooks, pamphlets, and periodicals were shipped to the Library of Congress at his bequest. The collection, comprised of materials relating to magic, spiritualism, witchcraft, demonology, hypnotism, escapology, and more, is housed in the Thomas Jefferson Building at the library’s Rare Book and Special Collections Division.

Anyone can view the collection because it’s in a public library. So in 1990, a friend and I paid a visit and were granted permission to access the “stacks” in the back where most of the materials are shelved. Being surrounded by books that Houdini pored over as recently as 64 years earlier was truly an indescribable feeling.

One of the highlights of the visit was seeing for the first time the famous postcard young Ehrich Weiss wrote to his mother after he ran away at the age of 12, about five years before he started calling himself Houdini and 13 years before he got the big break leading to worldwide fame.

Some of Houdini’s scrapbooks in the Library of Congress

While the postcard was one of the more significant pieces in the collection, Houdini’s personal scrapbooks—all 126 of them—were packed with newspaper clippings, theater notices, ephemera, and countless other items of interest. One such item was a small piece of paper with a simple illustration on it, perhaps drawn by the man himself; underneath, a typewritten caption read, “This figure contains all the letters in the alphabet.”

And it did! It was a rectangle containing two circles stacked vertically, with several intersecting horizontal, vertical, and diagonal lines to create a bilateral design. Tracing over the lines with my fingers, I could spell out every letter of the alphabet and even the numbers 0 through 9. I had never seen such an illustration and quickly grabbed a pen and paper to reproduce it exactly as I saw it in the scrapbook.

It’s been 22 years since that visit to the Library of Congress, and I only recently came across the copied drawing. While designing my new business card last year, I created a digital version of the illustration and put it on the back of the card. I recently tweaked that version to share with you (scroll down). Give it a whirl and see if you can trace each letter and number. Keep in mind that all the characters will be the same height. If you can’t find all of them, watch the accompanying video to see exactly where each one fits.

4 Responses to The Houdini Alphabet