The Houdini Bronze that Almost Was

When sculptor Mel Zapata set out to create a full-length, 14-inch-high statue of Harry Houdini, he had no idea the figure would never be cast in bronze and offered to the public as he intended.

But Zapata carefully sculpted away, depicting Houdini in that ever-so-famous pose in which the escapologist’s body stands hunched in shackles and chains as his enigmatic expression taunts the viewer.

“Houdini was always a subject of interest to me,” said Zapata, “but I was surprised to find out that there weren’t any full-figure sculptures of him. It was the perfect opportunity to create one.”

And that he did. It was in 2008 when an antique dealer commissioned him to make the clay model of Houdini pictured here. But ultimately the bronze casts were not to be.

Zapata, already known in magic circles for his now highly collectible reproduction of 19th century sculptor John Rogers’ The Traveling Magician, said the dealer originally wanted to have 500 sculptures of Houdini cast and sold. However, molds had to be made first, and the dealer didn’t have enough money to pay for them.

While other people offered to pay for the molds and even a bronze cast, the dealer didn’t want anyone else involved in the project, so Zapata hung on to the clay model for a couple of years. 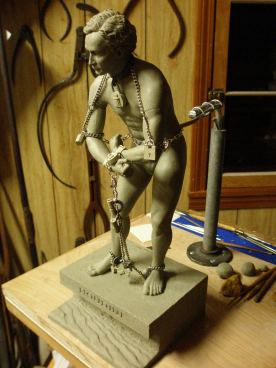 During that time, Zapata worked on other projects, including a Civil War-themed clay sculpture he finished in 2010, working with partners and a foundry in New Haven, Connecticut, to produce bronze casts. He told the foundry’s owner he also had a clay sculpture of Houdini, and the owner suggested molding it and casting it in bronze, then selling it in a gallery to recoup costs—a second chance for the Houdini sculpture to finally see the light of day.

Once again, that didn’t happen.

The Houdini molds were made. However, according to Zapata, the people he partnered with to create the Civil War statue purchased the final bronzes of that figure from the foundry without telling him. Months went by before he discovered this because the foundry owner wouldn’t return his calls, and Zapata couldn’t get a hold of him until it was too late.

Understandably upset, Zapata went to the foundry owner’s home, picked up the molds for the Civil War statue, and demanded that he also return the Houdini molds. The owner refused. When Zapata returned to the house, this time with the police, the owner denied ever working on the Houdini statue. 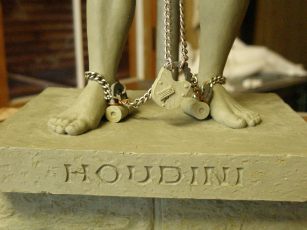 “I’ve been writing to magicians, asking them to contact me if they are to come across my sculpture,” said Zapata, whose eyes are open in case the foundry owner uses the molds to make and sell unauthorized copies of his Houdini statue.

Zapata, who now lives in Glen Cove, New York, said he sculpted the figure to look as if Houdini was standing on a ledge, ready to be thrown into the river below. He also stippled into the waves of the water the word “BELIEVE” to represent the secret code between Houdini and his wife Bess.

While Houdini enthusiasts will probably never get to see this particular sculpture in person, Zapata has already completed sketches for another Houdini statue, which he plans to make after he obtains funding. “I won’t get into details about the next Houdini statue,” he said, “but it will be more exciting than this one.”

UPDATE, 07/14/2018: The antique dealer who commissioned Mel Zapata to make the Houdini model contacted me to dispute some of Zapata’s claims about the funding of the statue. I will not reproduce the dealer’s email here because its assertions may or may not be true and could border on libel if not true. I don’t know what’s true because (a) I wasn’t present during any of the transactions between Zapata and the dealer, (b) I know neither Zapata nor the dealer, and (c) I don’t have time to adequately research the claims and write a follow-up blog. Just know that Zapata’s claims have been challenged, there are two sides to every story, and at this time I have no way of knowing which of those stories is true. TAI

2 Responses to The Houdini Bronze that Almost Was