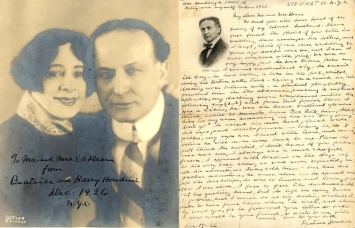 Photo and Letter from Bess Houdini to E.A. Dearn (click to enlarge)

Magicians the world over have heard of magic historian and author Edwin A. Dawes. But there’s another Edwin A. whose role in the history of magic and Houdini has been either overlooked or simply unknown: Edwin A. Dearn (1892–1980), also known as E.A. Dearn.

A close friend of Max Malini and a member of The Magic Circle in London, Dearn lived in Birmingham, England, and eventually made his way to Shanghai, China, living and performing there for about 25 years. Sometime in the early 1950s, he fled China to escape communist rule, moving to Sydney, Australia, where he remained until his death in 1980.

So what’s the link between Dearn and Houdini?

Dearn was an avid collector of magic memorabilia, books, and ephemera—so much so that a 1926 Shanghai magazine, The Town Traveller, featured his collection. Consequently, he was in contact with many other collectors around the world, including Houdini, who corresponded regularly with Dearn in the 1920s.

According to a recent story in The Daily Telegraph, Dearn’s daughter-in-law—a resident of Roseville, New South Wales—was recently cleaning her garage when she discovered a wooden chest containing many items from her father-in-law’s collection, including signed letters from Houdini to Dearn. Lawsons auction house in New South Wales will offer this incredible collection next Friday, February 22.

There are so many gems in the collection. For instance, in one letter, dated December 16, 1925, Houdini tells Dearn that, while on the road, his lay audiences seem to be more pleased with his performances than his fellow magicians: “I have made an enormous hit,” Houdini writes, “the magicians have stated I am doing a rotten entertainment and they number only about five thousand, however there are millions of the public who are satisfied, so I do not mind.”

But what really caught my attention was a handwritten letter from Houdini’s wife, Bess, to Dearn and his wife—dated December 19, 1926, less than two months after Houdini died. Still filled with sorrow, she confided in the Dearns, describing the incident with McGill University student J. Gordon Whitehead as well as the final moments she spent with Houdini:

My Dear Mr. and Mrs. Dearn

No doubt you will have heard of the passing of my beloved husband. Have just found the photos of you both in wedding dress among his letters, and I wept, thots [sic] of our own wedding 32 years ago swept over me, and I am almost overcome with grief. We were so very happy, and he was taken from me. I cannot understand why – he wasn’t ill long – he had broken a bone in his foot, whilst doing his torture water trick – lying on a couch in his dressing room between acts – a student playfully punched him in the abdomen, causing a ruptured appendix, my darling never complained untill [sic] the following day (Sat) and from that foolish blow, I was a widow, he was the same brilliant glorious mind, untill [sic] 20 minutes before God took him, I held him in my arm [sic] screaming in his ear ‘Harry Harry don’t go’ he raised his dear head, opened wide his eyes, and went – forever – Today it is 7 weeks, my eyes are blind with tears, and cannot believe he will never come back to me. Please do not think I’m morbid, I don’t know if you folks ever met me, I always was a more cheefull [sic] person, I appeared with Houdini on the stage up to his very last show, we were never seperated [sic], in all his adventures I was with him – but this his greatest adventure, he went alone — he spared me all the hardship, he was so tender and loving, and now I am alone, I fear to face the darkness without his guiding hand, but he left me many tasks to perform, and I must do as my darling wished. I like to hear from those whom he loved, and I know he loved you, for he preserved your letters so well. I also would be your friend, so write to me, with much love to you both.
Dec. 19– 26 Beatrice Houdini

For those unfamiliar with the actual cause of Houdini’s death, it’s worth noting here that he died of peritonitis, not a blow to the stomach. In any event, I find Bess’s letter interesting for many reasons, not the least of which is her heartbreaking plea to her dying husband: “Harry Harry don’t go.” If Bess accurately described that moment, those desperate words very well may have been the last Houdini ever heard.