If you’re a fan of children’s literature, then you’re probably familiar with Sid Fleischman’s work. If not, here’s the scoop: Fleischman (1920-2010) was a Newbery Medal-winning author who wrote children’s books, screenplays, novels, instructional magic books, and a kid’s bio on Harry Houdini. In his youth, he performed magic in his hometown of San Diego, California, and, with a friend, even took his show on the road.

When Fleischman was still in his teens, he met Bess Houdini and apparently maintained a friendship with her until her death in 1943. In his 1996 autobiography, The Abracadabra Kid: A Writer’s Life, he includes a wonderful photo of him and Bess in Balboa Park in San Diego (see accompanying picture). Taken in 1936, the photo shows Fleischman at the age of 16 with Bess beside him signing a playing card. (When I first saw the image, I thought he looked older than 16 but quickly remembered Bess was only about 4′9″ and thus somewhat dwarfed by the young magician.)

Living only a mile from the park, I went there on a few occasions specifically to look for the exact location where the photo was taken. At first, it was a fun game to me; however, after about three or four unsuccessful attempts to locate the spot, I got antsy and finally sent the photo to an administrator of the Balboa Park Facebook page with a request to identify the mystery location. Within six minutes, the (unidentified, yet awesome) admin got back to me with an answer. Fleischman and Bess were standing next to the fountain of the Aztec Woman of Tehuantepec (La Tehuana), located in the park’s House of Hospitality courtyard. I grabbed my camera, headed back to the park, and took some shots of the area where Fleischman and Bess once stood about 78 years ago.

The image that follows is a side-by-side comparison, then and now. Obviously some things have changed since 1936, including some restoration and the addition of a brick foundation under the fountain. However, this is definitely the location. That sculpture, by the way, is by Donal Hord, who created the piece for the 1935 California Pacific International Exposition. I’ve included a few more images of the fountain, sculpture, and courtyard below.

To learn more about Sid Fleischman and his work, visit his official website at www.sidfleischman.com. To read more about Bess Houdini, check out some of the great articles about her on John Cox’s Wild About Harry blog. 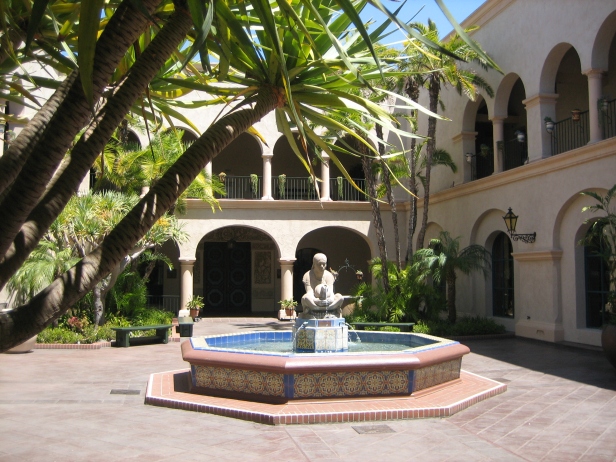