When Harry Met Larry: Was this man Houdini’s assistant?

Blogcast #10 is live! This one’s about a man who claimed he was Houdini’s assistant for 33 years, but I cast some doubt on that. It’s based on a blog I wrote a few days ago, but these blogcasts are a bit easier to digest. I’ll also be posting this on SoundCloud later tonight.

This man claimed to be Harry Houdini’s assistant and stand-in for 33 years. It just ain’t so. Read more at the Interval Magic blog:

Three days ago I posted an entry on my Interval Magic blog about Harry Haudyni, the German imitator of Harry Houdini. Blogcast #9 elaborates on that a bit and provides a way for you to listen to the original blog instead of having to read it (video below). And on that note, I’ve been posting audio-only versions of the blogcasts on my SoundCloud page. Personally, I think the videos are cool to watch, but sometimes just the audio is easier to listen to. Either way, I hope you enjoy this blogcast about Harry Haudyni. 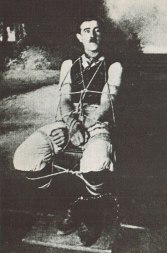 Harry Houdini had many imitators. One of them, called Harry Haudyni, appeared in a 1929 Movietone News film escaping from a straitjacket at a fair in Germany. To read more and to watch the full two-minute film, go to the Interval Magic blog: https://intervalmagic.wordpress.com/2019/06/10/haudyni-a-german-houdini-imitator/

In 1904, Harry Houdini purchased a summer home on farmland in Stamford, Connecticut. For some unknown reason, he sold it a year later, and since then, only two other families have owned it. The original house burned down in the 1960s, but a replica was built on the original foundation, and two original wells still grace the property. To learn more, check out Blogcast #8: Harry Houdini’s Stamford Home below or directly on the Interval Magic YouTube channel (@intervalmagic).

Are you a Houdini geek? A Connecticut history buff? No? Then the video below probably isn’t for you. It might sound kinda silly, but Houdini enthusiasts like me want to travel back in time to meet the legendary magician and escape artist himself. Of course we can’t do that since we don’t have a time machine, but the next-best thing is to visit in person or virtually different places Houdini has been. Read more →

* * * * *
Note: For those who follow this blog, thank you so much for doing that! I’m not closing it down or anything, but I’ve decided, for now, to start posting everything related to magic and Houdini on my Interval Magic blog. Why? Time has been a bit tight lately, and I want to post everything in one place. But rest assured I’ll post links here to my Houdini material, so you can continue to follow this blog. And I might decide to post full articles here again in the future. Thanks again.

Dynamite magazine, issue #79, December 1980, features an article about Harry Houdini titled “HOUDINI: The Magic Man Who Knew Whodunit!” As part of that theme, the mag includes a companion two-piece punch-out that, when constructed, becomes a mechanical toy showing Houdini escaping from heavy chains and shackles. This is the subject of today’s blogcast, which shows an animation of the device in action! Watch below or directly on the Interval Magic YouTube channel (@intervalmagic). And while you’re there, please “Like” the video (if you like it), subscribe, and share it with anyone who might enjoy it.

In 2013, National Geographic’s Brain Games commissioned artist Pete Fecteau to create a Rubik’s Cube mosaic of the Houdini two-face optical illusion I made that year. I wrote about it at the time, and that’s the subject of today’s blogcast. Hope you enjoy! 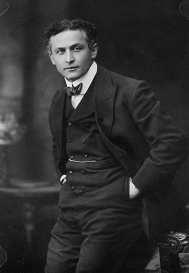 On March 24, 1874, Erik Weisz was born in Budapest, Hungary. After moving to the United States four years later, the spelling of his name would be anglicized to Ehrich Weiss.

From the early 1880s to the 1890s, young Ehrich, who grew up in Appleton, Wisconsin, and New York City, became fascinated with show business, participated as a trapeze artist in a neighborhood five-cent circus as “Ehrich Prince of the Air,” took up running, and eventually read the book that would change the rest of his life: Memoirs of Robert-Houdin, an autobiography of the pioneering French conjurer who is often referred to as “the father of modern magic.”

Ehrich’s interest and skill in magic advanced, and when he was ready to perform publicly, he changed his name to Harry Houdini (the first name derived from his childhood nickname of “Ehrie” and the last name borrowed from his hero, Robert-Houdin).

Houdini got his first big break in 1899 and, by the early 1900s was internationally known as an escape artist. Throughout his career, he escaped from virtually every conceivable contraption known in that era and performed grand illusions such as making an elephant disappear.

Houdini devoted his later life to debunking both well-intentioned and fraudulent spiritualistic mediums. He died on Halloween in 1926 from peritonitis.

Blogcast #5: Wild About Harry Since 1975 is live! I talk about John Cox, the creator of the most comprehensive Houdini-related website on the Web: Wild About Houdini. If you’re a Houdini, magic, or history enthusiast and haven’t visited the site, you owe it to yourself to do so. More about that in the video.