John Cox: Wild About Harry Since 1975 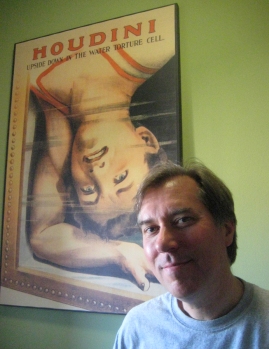 In 1980, 15-year-old John Cox told a Los Angeles Times reporter he was the third disciple of Harry Houdini. The first two, he said, were carnival worker Edward Saint and noted illusionist and author Milbourne Christopher. At the time, John, whose business card and stationery read, “John C. Cox, Houdini Enthusiast,” said he hoped to write a definitive history of Houdini. Thirty-three years later, the realization of that wish is Wild About Harry, the most comprehensive Houdini-themed blog on the Web today.

Although John launched Wild About Harry only three years ago, the blog’s origin dates back to 2005 when he created a monthly online newsletter called Houdini Lives, which became a full website the following year. But in 2010, John decided to transfer most of that site’s content from an Apple iWeb template to a more functional, smartly designed Blogger interface—the site Houdini fans and researchers worldwide are now familiar with.

“The simple idea was to create a website that keeps up with everything that’s new in the world of Houdini,” says John. “Wild About Harry still delivers the news, but it also includes my own experiences with collecting and going to events and doing research, or even just thinking about a certain topic. And now it’s become an even larger experience with people contributing material and participating in the research. I’ve been pleasantly surprised at how it’s become such a communal place and real hub of Houdini activity and thought.”

Wild About Harry, which has drawn more than a million visitors since its launch, is packed to the pixels with primary and secondary research and interpretation, news stories, books, fictional portrayals, special features, cultural references, collection highlights, auctions, and external links to other original Houdini-related content. John says the main requirement for content to appear on his site is that it “has to interest me as a Houdini buff and historian. I figure if I’m into it, then all Houdini buffs will be into it.”

And to further enable the typical Houdini buff’s addiction, John has harnessed the power of social media to promote his blog and all things Houdini. At the time of this writing, John’s Twitter feed has attracted more than 350 followers while his Wild About Harry Facebook page has 700 fans. And those numbers don’t include the separate, specialized Houdini-themed Facebook pages he runs: Houdini (2,170), Bess Houdini (121), Hardeen (94), Houdini’s Movies (166), and Houdini the Miniseries (115).

Despite having several other interests, including Sherlock Holmes, James Bond, movies, Hollywood history, and Universal Monsters, John has lived and breathed Houdini since 1975, the year he saw Houdini, the 1953 film starring Tony Curtis and Janet Leigh, and Doug Henning perform Houdini’s Water Torture Cell on television. From that point on, he was hooked, and this “double whammy,” as he puts it, inspired him to read two books that would be the first to contribute to his lifelong fascination with the legendary escape artist: Houdini: The Man Who Walked Through Walls, by William Lindsay Gresham, and Houdini On Magic, by Walter B. Gibson and Morris N. Young.

With his father’s help in the 1970s and ’80s, John, who lived in the Canoga Park neighborhood of San Fernando Valley in Los Angeles at the time, substantially added to his library and has since amassed a collection of more than 500 books and some 1,500 other items, including original autographed photos, letters, posters, pressbooks, programs, publications, press clippings, multimedia, and other odds and ends, such as a chunk of glass from an original Houdini Water Torture Cell and even strands of Bess Houdini’s hair.

I had the pleasure of perusing John’s collection in September after he and I dined at The Magic Castle with actress Kristen Connolly, who was consulting us about her new role as Bess Houdini for History’s upcoming Houdini miniseries. John, who lives in Studio City about 10 minutes from the Castle, was extremely hospitable and gave me free reign to look through everything. Not only is it a great collection, but John is meticulous in organizing and caring for it.

Leafing through his personal scrapbooks took me back to my childhood when I, too, saved anything and everything about Houdini and magic. Every clipping was sacred, every ticket stub and souvenir program in its place. But my meager collection pales next to John’s. His bookcases are filled with stacks of Houdini-related publications and what must be almost every edition of every book ever written by or about Houdini, including some that are autographed by the man himself. Signed photos and letters are displayed or tucked away, and Houdini posters and novelties grace some walls and bookshelves.

John Cox featured in the Valley News escaping from a straitjacket at age 15 (Photo: Courtesy of John Cox)

Back in the day, the beginnings of this collection were substantial enough to earn John some publicity in a few local newspapers, including the Valley Chronicle, Valley News, the Los Angeles Times, and Hunters’ CALL, his high school paper, which referred to him as “a bit of a celebrity.” In a way, he was a local celebrity, even if only for a short time. In addition to collecting Houdini books and memorabilia, he put on magic shows at schools and other venues and performed Houdini-like stunts, such as escaping from a straitjacket and shedding handcuffs and chains after jumping into a swimming pool. He appeared on a local news channel and even performed his straitjacket escape on The Toni Tennille Show.

These days, John doesn’t perform. In fact, he quit when he was about 16 years old. “I just suddenly realized I wasn’t a performer,” he says. “I was a historian, and I stopped. It was that easy.” As a historian, John has learned from many Houdini experts over the years, including Manny Weltman, Patrick Culliton, John Gaughan, and Sid Radner. But one of his favorite moments was meeting Marie Blood, Houdini’s niece.

“That was an out-of-body experience for me,” he says. “I had driven to Colorado Springs, two days, and we were sitting together alone in a big hotel lobby beside a fire with a thunderstorm outside, and she’s sharing with me family secrets. When she told me Bess [Houdini’s wife] smoked, I almost fainted. All these years of study and then just one little thing like that from a family member gives you a key character detail that blows your mind. I really felt like I was in the room with Houdini himself. Like I said, out-of-body experience.”

John Cox of Wild About Harry with a small section of his Houdini library (Photo: Copyright 2013 Tom Interval)

Some might think John’s interest in Houdini is borderline excessive. That’s because it is, but in a great way. It’s his unbridled passion that inspires him to consistently produce original content, which, in turn, fuels discussions and debates among Houdini scholars and contributes to our overall understanding of one of the most significant historical figures to ever live. And that passion hasn’t waned in the least since 1975. John says he doesn’t know exactly which aspects of his personality so intensely draw him to the great entertainer. “It’s probably rooted in some deep psychology,” he says. “But I’m also a lover of mystery, the past, and all things gothic, and Houdini sits well in that frame.”

John’s passion—or “obsession,” as he once called it—is represented well on Wild About Harry, and for good reason: John is a natural writer and has been since he was a kid. “I remember when I was 12 or so, I sat down and started writing a book about Houdini,” he says. “I was dead-set determined to write a full book. I think I got about 25 pages done, which is a lot when you’re just sitting with a pencil and paper while other kids are playing outside.” Despite his childhood love of writing, John says he was a “terrible speller” and that the “massive mechanical aspect” of writing held him back until his college days, when computers and spell-check made those mechanics a bit easier. “It’s interesting to think that, for me, technology—the computer—is an essential writing partner,” he says. “Maybe that’s why I’m so comfortable being a blogger.”

When he’s not blogging, John, a graduate of USC School of Cinematic Arts, works in the film industry as a quality-control technician and screenwriter. In the latter position, he has penned projects for ABC, CBS, USA, DreamWorks, MGM, Sony Pictures, 20th Century Fox, and Warner Brothers. His first produced feature film, coauthored with Agatha Dominik, was Boot Camp (2008), starring Mila Kunis and Gregory Smith. 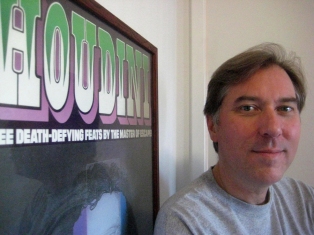 With John’s connection to Hollywood, it’s no surprise he has a special interest in Houdini’s filmmaking career. His favorite Houdini film is The Master Mystery (1919), a 15-part serial starring Houdini as Quentin Locke, a Justice Department agent who investigates a shady patents company that dupes inventors. “He’s great in it,” says John. “There are some fantastic escapes. And it’s incredibly long. You can sit for hours and just watch the living Houdini. I love it.”

John says he would someday like to write a book about Houdini’s film exploits but doesn’t have time to research and write it at this point in his life. He does, however, plan to work on a book containing some of the best material from Wild About Harry. “I just really want to get some of this into a printed version,” he says. “I think people would really like it.” Other than that, he has no future plans for the blog. “I don’t try to force anything,” he says. “I enjoy how [the site] grows and evolves naturally.”

In the mean time, John plans to continue consulting on Houdini projects, giving presentations, writing articles for online and print publications, and, of course, adding fresh content to the blog. He has already appeared as a Houdini expert on the Houdini Exposed documentary; assisted NPR, BBC, and other media companies and organizations with Houdini projects; written two articles for Magic magazine; and given presentations at last year’s Magic Collectors Weekend in Chicago and the Official Houdini Seance in Fort Worth.

All of John’s exploits over the years make it clear that he transcended the role of Houdini disciple long ago. Not only is he “a one-man aggregator of all Houdini news on the web,” as David Byron of The Mandala puts it, but he is easily the most prolific, active, and original Houdini blogger out there, setting a new standard for the dissemination and interpretation of information relating to Houdini. These are qualities of a leader. The only disciples are those attempting to follow his example.

Listen to/watch this blog entry as a blogcast:

9 Responses to John Cox: Wild About Harry Since 1975