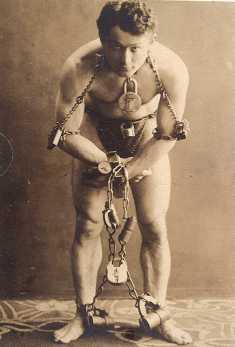 On March 24, 1874, magic’s most legendary entertainer was born: Erik Weisz.

Four years after his birth in Budapest, Erik and his family moved to the United States, where the toddler’s name was Americanized to Ehrich Weiss.

To learn more about Houdini, I recommend starting with this biography (probably the most accurate one so far):  Houdini!!!: The Career of Ehrich Weiss, by Kenneth Silverman.

In the mean time, be sure to toast Harry on his special day.

This entry was posted in Misc. Bookmark the permalink.

1 Response to Houdini: Escaping the Womb 141 Years Ago Today