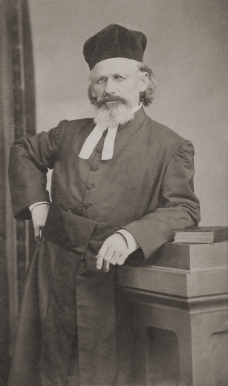 When Rev. Dr. Mayer Samuel Weiss arrived in the United States in 1876, doubt likely plagued his mind. At 47, he wasn’t a young man anymore, but he wanted to create a better life for his family back in Budapest.

It took him two years, but Mayer, a highly educated rabbi, finally landed a good job in Appleton, Wisconsin. The Zion congregation, comprised of more than 75 people from about 15 families, sought a spiritual leader and appointed Mayer its pastor. On September 28, 1878, The Appleton Crescent expressed hope that the “able Rabbi…who has been here a few weeks” would “remain permanently among us.”

Mayer was 5,000 miles away from everyone he loved, but he wouldn’t be alone for much longer. His wife, Cecilia, and the five children—including four-year-old Ehrich, who would later achieve worldwide fame as Harry Houdini—joined him in Appleton that year.

The family enjoyed an idyllic life in a flourishing farm town that seemed to embrace Mayer with nothing but respect and admiration. Describing a wedding he officiated in 1879, the Crescent wrote that “the venerable appearance of the excellent Rabbi [commanded] the most profound respect.” At another wedding reported in the Crescent the following year, “The Rabbi is said to have been particularly felicitous in his address and fatherly advice to the newly wedded couple.”

Samuel Weiss became a citizen of the United States on June 6, 1882.

Yet respect and admiration weren’t enough. By 1882, the year Mayer officially became a citizen of the United States, the congregation, or possibly its president and future Appleton mayor, David Hammel, had serious reservations about the rabbi. “Some of the leading actors in the congregation, thinking he had grown too old to hold his position, supplanted him for a younger man,” Houdini later wrote in Will Goldston’s The Magician Annual of 1909–1910. Major biographies about Houdini, including Kenneth Silverman’s Houdini!!!: The Career of Ehrich Weiss, and Houdini: The Making of America’s First Superhero, by William Kalush and Larry Sloman, similarly attribute the rabbi’s ousting to his age, old-world views, and inability to speak English.

No one definitively knows why the congregation wanted to replace Mayer, who led the group before it even had its official synagogue, Temple Zion, on the corner of Harris and Durkee streets (before that, they met on Fridays and Saturdays in Odd Fellows’ hall on College Ave.). Age and outdated views are feasible explanations, but the three languages he spoke (Hebrew, Hungarian, and German) shouldn’t have been an issue since probably most members of the congregation were among the three waves of German immigrants to settle in the United States from 1845 to 1893. Plus, the rabbi that the congregation chose to replace Mayer, Ferdinand J. Solomon of Westphalia, Germany, didn’t know how to speak English.

“He is a cultured gentleman,” wrote the Crescent about Solomon on September 16, 1882, “and is becoming generally acquainted among the people, although he labors under the disadvantage of being unable to speak the American language, a difficulty he is determined to overcome as speedily as possible.”

Solomon gave his first sermon to the Zion congregation about a month before that story was published and exactly one week after Mayer gave his farewell sermon on Sunday, August 6, 1882. The Appleton Post published the announcement on Thursday, August 10: 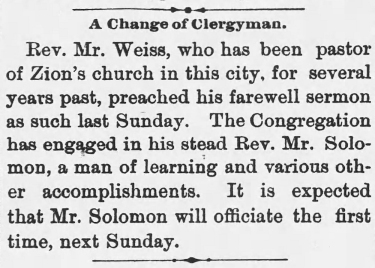 Described by the Crescent as “highly polished,” Solomon was a graduate of Muenster University in Westphalia. So what did Solomon have that Mayer didn’t? Greater eloquence? More progressive ideas? German blood? A willingness to learn English? Or was Mayer’s firing related to something completely different, such as a falling out between him and Hammel? 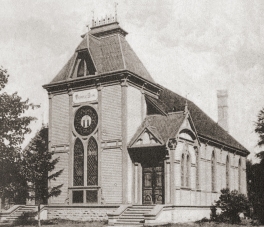 The latter might help to explain why Mayer wasn’t mentioned in a lengthy feature article in the Crescent about Temple Zion’s dedication on September 14, 1883, or in any dedication announcements leading up to that day. That’s a pretty blatant omission considering Mayer helped plan the temple. In any case, Hammel and the rest of the congregation were clearly satisfied with the new rabbi’s leadership because Solomon held that position until his death on May 11, 1892.

Emanuel Gerechter, the pastor of the B’ne Jeshurun Temple in Milwaukee, would replace Solomon. On July 8 of that year, Gerechter, who spoke German and English, lectured at Temple Zion. “The reverend gentleman is a very scholarly man and made a very fine impression upon his hearers,” wrote The Appleton Post on July 14. “In opening he returned thanks for the hospitality that had been extended to him in Appleton and also paid a glowing tribute to the goodness and righteousness of the late Rev. Salomon [sic].”

It’s not clear exactly when the congregation officially appointed Gerechter, but he was Zion’s rabbi by September 2, 1892, the day of his first sermon, and continued in that role for 28 years until he left Appleton in 1920. During that stretch, he also was professor of German and Hebrew at Lawrence University in Appleton before his retirement in 1913. He died on Oct. 13, 1926, less than three weeks before Houdini died.

After Mayer’s farewell sermon in August 1882, he and his family didn’t stay in Appleton for very long. “We thereon moved to Milwaukee, Wis.,” continued Houdini in The Magician Annual, “where such hardships and hunger became our lot that the less said on the subject the better.” By that time, Cecilia had two more children, which made it even more difficult for Mayer to support the family.

“To maintain his family,” writes Silverman, “he seems to have conducted some services outside the city’s organized religious life.” And sometimes far outside the city itself. In March 1883, on the weekend of Ehrich’s real ninth birthday (he was born on March 24, but the Weisses celebrated on April 6), Mayer gave two sermons on Friday and Sunday at the First Street Temple in Louisville, Kentucky, located about 500 miles southeast of Milwaukee. The announcement as it appeared in the Friday, March 23, 1883, edition of The Courier-Journal, refers to Mayer as “one of the most learned Rabbis in the United States”: 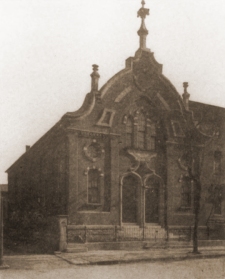 Did Mayer travel that far for only one job? Although records like the aforementioned newspaper clipping seem to be rare, it’s hard to believe this particular trip didn’t include several sermon stops along the way—a rabbinical tour, of sorts. And did he make similar road trips before and after Louisville? Either way, he most likely officiated services when and where he could, locally or otherwise, and, according to Silverman, might have opened a “private school” in Milwaukee.

Ultimately, his efforts didn’t make a difference, and his family was forced to ask for help. Even Ehrich, who by now made his debut as trapeze artist “Ehrich, The Prince of the Air” in a neighborhood children’s “circus,” helped earn money by shining shoes, selling newspapers, and running errands. And if Ehrich’s brothers, Herman, Nathan, and William, also contributed during the lean years, records don’t seem to show it. They were the only siblings conceivably old enough to get odd jobs like Ehrich.

Within Milwaukee, the Weisses moved from one place to another, and some Houdini biographers, including Kalush and Sloman and Bernard C. Meyer, author of Houdini: A Mind in Chains, suggest they were trying to avoid creditors. And to add to the emotional turmoil the family was already going through, Herman, Ehrich’s half-brother, died of tuberculosis in December 1885 at the age of 22.

Postcard 12-year-old Ehrich Weiss mailed to his mother from Withers Mill, Missouri, after running away in 1886

Considering the profound stress on the family, their horrific living conditions, and Herman’s death, it’s no surprise Ehrich ran away in 1886 to escape hardship or to find work out of duty for his family. Either way, very little is known about Ehrich’s time away from home except that he ended up in Delavan, Wisconsin, where a compassionate couple, the Flitcrofts, took him in that summer. The only tangible artifacts that exist from that time are photos of Houdini with the Flitcrofts and a postcard young Ehrich sent to his mother.

Sometime in 1887, Mayer temporarily left his family again to find work, this time in New York City. Ehrich met him later that year, followed by the rest of the family in 1888. Once again, rabbinical work was hard to come by, and Ehrich, and possibly his father, found jobs on Broadway as assistant necktie cutters at H. Richter’s Sons, which touted “steady work guaranteed” in at least one of its help-wanted ads. (It’s interesting to note those ads always asked for female applicants.) Apparently the “steady work” at Richter’s didn’t bring in enough money, so Ehrich also worked in a tool-and-die shop, possibly in a print shop, and as a messenger boy for the Mutual District Messenger Company and the American District Telegraph Company.

Ehrich Weiss, before he was Harry Houdini, was a messenger boy in New York City, age 13, 1887

With money coming in, the years ahead for the Weisses were slightly easier. Ehrich developed serious interests in long-distance running and conjuring. His passion for magic might have developed earlier in Milwaukee, and it was likely intensified around 1891 after he met Jacob Hyman, a coworker at Richter’s and fellow amateur magician.

Inspired by the memoir of Jean Eugène Robert-Houdin, the pioneering 19th-century French conjurer, Ehrich or Jacob invented the name “Houdini” by adding an “i” to the end of Houdin. Together, they developed a conjuring act, quit Richter’s, and performed in New York as “The Brothers Houdini.” Their feature illusion, a brilliant variation of John Nevil Maskelyne’s Marvelous Box Trick, was Metamorphosis, in which they switched places inside a locked wooden trunk in three seconds. Ehrich and Jacob continued to perform until early 1894 when Jacob dissolved the act. For a short time, Jacob’s brother, Joe, took over until Theodore Weiss, one of Ehrich’s younger brothers later to be known as Hardeen, became the third Brother Houdini. 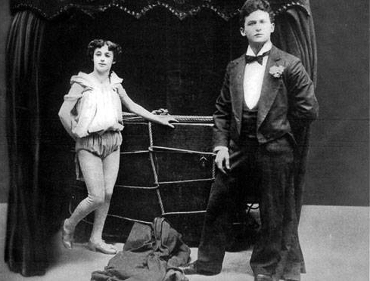 The Houdinis posing with the Metamorphosis trunk, 1894

But Ehrich and Theo’s partnership also was short-lived. At the beginning of June 1894, Ehrich met Wilhelmina Beatrice Rahner (Bess) in Coney Island, New York, and, after a whirlwind courtship, married her a few weeks later. She replaced Theo in the act, and Ehrich and Bess performed as “The Houdinis.” Although Jacob continued to perform using the name Houdini and J.H. Houdini (and with his brother Joe, sometimes “Houdini and Herne” or “The Brothers Herne”), Ehrich considered himself the one and only Houdini, changing his first name to Harry, derived from “Ehrie,” his childhood nickname. Thus Harry Houdini was born.

Mayer Samuel never got to meet Bess or see his son attain international fame as Houdini only 13 years later. Appleton’s first rabbi died on October 5, 1892, age 63, after an operation to remove a malignant carcinoma from his tongue. 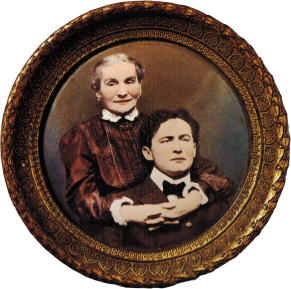 Houdini with his mother, Cecilia

Houdini lore would have us believe that Mayer, just before his death, asked Ehrich to renew a promise he made as an 11-year-old in Milwaukee to provide for Cecilia after the rabbi’s demise. Whether or not that’s true, one thing is clear: From the days he mailed Cecilia part of his meager income from dime museums, beer halls, big tops, and variety shows, to the time in Budapest when he reportedly hosted a lavish gala for her as she wore a gown designed for Queen Victoria, Houdini did everything he possibly could to make his mother’s life easier.

Some researches, such as Bernard Meyer, might assert Houdini had an Oedipus complex and was therefore trying to atone for his father’s inability to support the family while worshiping his mother to an unnatural degree. But it’s more likely Houdini was simply trying to be a good son—his own version of a farewell sermon honoring both Cecilia and Mayer, who did the best they could during their arduous years in the United States.